skip to main | skip to sidebar

A couple of public works in progress . . . 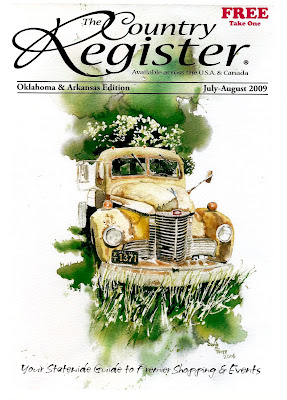 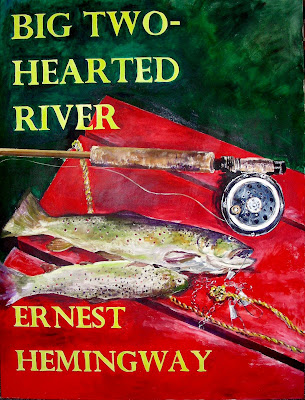 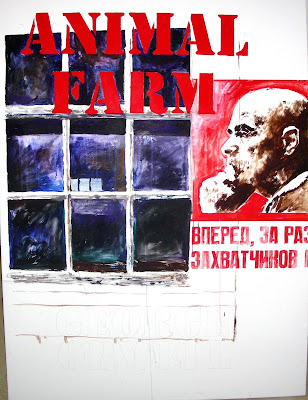 I'm not pleased that my watercolor activity has been suspended, but promises have been made, and it's time to deliver. I'm finishing the last two paintings promised to the Martin High School library (where I teach). My Facebook contains the previous works from past years. I agreed to do a series of "book covers," each measuring 4' x 3', and arranged around the perimeter of the library. This week I worked on a Hemingway short story, and today I began Animal Farm. I have them posted above.

While working on Animal Farm, I received a surprise phone call from the editor of The Country Register. They have decided to publish one of my watercolors, Tell Me Where the Road Is, in the July-August issue of their free shopper. This will be distributed across Oklahoma and Arkansas. They published my Waxahachie Blue earlier this year. I cannot express my genuine pleasure to receive free advertising. It's been a rewarding day . . .
Posted by David at 6:15 PM 1 comment:

Return to Painting after a Brief Hiatus 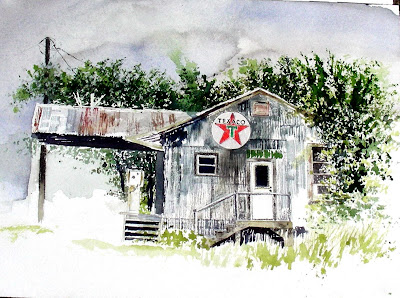 Following a week of A.P. Art History at the Institute, it was nice to pick up the brush again on this hot Saturday morning. I drove the one-hour journey to Hillsboro, and set up outside Burson Gallery. The temperature climbed to 103, but I remained in the shade, and a heavenly breeze made the project durable. I began this composition on location on Business Hwy. 287 in Decatur, about 2-3 weeks ago. Now, thanks to a Hillsboro quiet, it is nearly complete. Time to move on to other half-finished works . . .
Posted by David at 3:18 PM No comments:

I'm on a different computer, so I cannot access Facebook to answer your posts. But I wanted to say "Thank you" so much for reading my blogs--they are an important part of my day. Texas misses you too, and so do all of us. My music has been reduced to infinitesimal (sp?) proportions--but we WILL have that house concert this Christmas season, I've confirmed that. Instead I've been painting my heart out, and it's a very good thing for me right now.

Let me know how you are doing, Kat,

David
Posted by David at 4:02 AM No comments:

A Town That Time Forgot 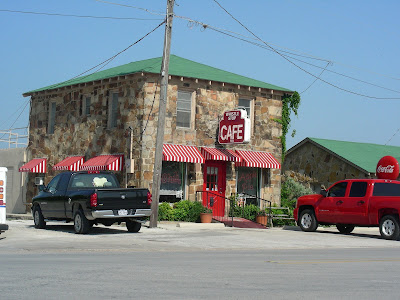 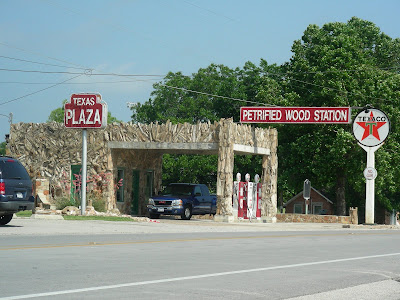 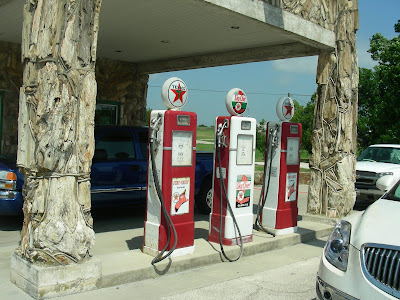 This morning, early, I returned to Decatur to get a better look at the Whistlestop Cafe under direct sunlight (yesterday remained dark and stormy). I learned that this cafe has been in operation nonstop since 1929. I set up across the street and began a panoramic composition of the Cafe and the Petrified Wood Station down the street. I don't believe I have ever seen vintage gas pumps such as these anywhere except indoors at a museum or antique shop. These are still in place, in front of the station. The sun got pretty hot today, and the humidity was not pleasant. I have opted to finish this painting indoors in the days ahead.

A Meandering Odyssey of Plein Aire on a Dark Day 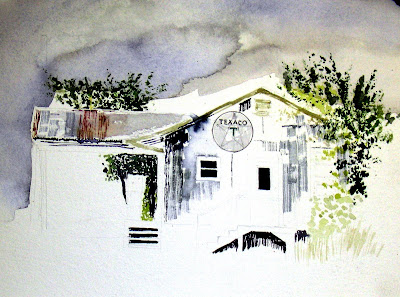 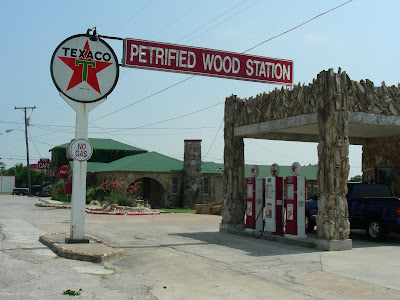 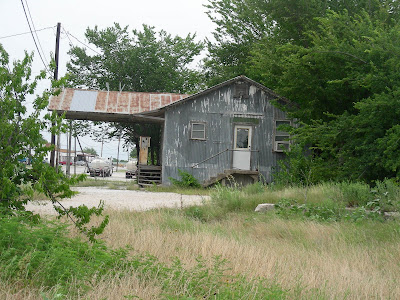 Today was a long one. My wife Sandi had a horse clinic to atttend, so we went our separate ways this morning, into the gathering darkness of lingering storms from last night. Once I got to downtown Fort Worth, the heavens opened and the rains came in cascades. I realized at that moment that I had left my painting stool in the garage (turned around!). Twenty-five minutes later, the stool retrieved, I returned to Fort Worth, and the rains were right there where I had left them. Drove through a monsoon that ended at West Loop 820. On to Weatherford. The skies dark, no shadows or highlights to be found anywhere. I thought about a grain elevator and train freight depot. Too dull. No light. Then I drove northward to find an old gas station I had painted earlier this year. No luck. On to Springtown. Then on to Decatur.

In Decatur, the light came out, and the winds picked up. On Old Business Highway 287 I found the string of businesses I had been invited to paint by the owner (last year when I displayed at Fort Worth's Jazz by the Boulevard). The businesses were a perfect time warp for "Recollections 54" (the name of my art company). I sat in front of my Jeep and sketched an old station, then added the Texaco sign (I thought it needed it). By 3:30 the sun was coming on strong (and the humidity). Mosquitoes were emerging from the swampy bar ditch beside me. I decided it best to come on home, and finish this one later, which I shall.

The day was long, but filled with sights and internal rewards.
Posted by David at 5:36 PM No comments: 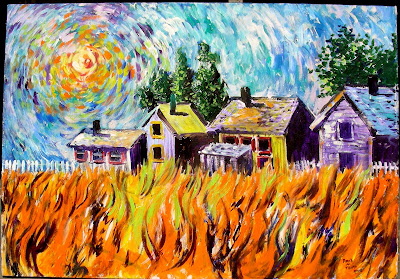 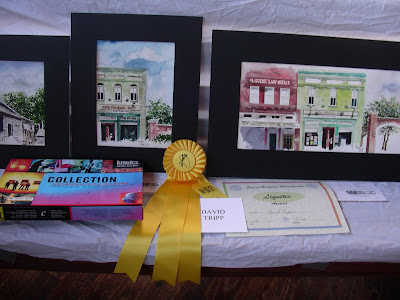 The Nirvanic Calm Following the Festival Storm--already it's Wednesday, and it feels as though I just finished breaking down the tent, packing up the display antique door panels, loading crates of art and journeying back home (though I completed that three nights ago).

I am still weary, not having slept adequately the past ten nights (usually "wired" with the events surrounding me), but have returned to the health club after a week's hiatus, and am confident that the strength and energy will return.

Nearly every aspect of the past festival activities was a success. I won an honorable mention at the Plein Aire event, and with it came a large case of Liquitex heavy body acrylic tubes. More importantly, I was given the critique passed on by the judge (Bruce Peil, an accomplished plein aire artist who conducts workshops at his bed-and-breakfast in Athens, Texas). He noted that my drawing skills were good, but my shadows were dead, due to my dependence on black. He encouraged me to look more intently at the shadows, and see how they fluctuate between the warm and cool colors. He proposed mixing Cadmium Red and Ultramarine Blue for my "black" to paint as a base in the shadows. I plan to put this theory to work in my very next plein aire painting (which would have been today, had it not been so dark and overcast--and I still so tired!).

The other watercolors from the Waxahachie Paint Out are already posted. I was pleased to have sold the Honorable Mention winner--"Waxahachie Commerce" (headlining the previous blog post), along with the one titled "Not Coming Back" (previous blog) as well as the one painted during the Quick Draw on the opening day of festivities.

The Mansfield Festival went very well, with many pieces being sold, along with a surprise sale of one of my acrylic canvases, a Van Gogh-style painting called "Vincent's Dream" (posted at the top of today's blog). I wouldnt' have traded my conversations with fasinating festival patrons that day for anything in the world.

The Waxahachie Gingerbread Trail festival, in which I participated only Sunday (Mansfield the day before) was not so great, though I sold more work than I paid out in booth fees (so technically, not a loss), and I met many, many wonderful people and was given several significant leads. I also found out during that day that my watercolors had sold in the Chatauqua Pavilion from the plein aire event. I think the greatest part of Sunday was getting to visit with several of the plein aire artists again, including Ted Clemens, winner of the Best in Show at plein air, and Kent Brewer, another Honorable Mention winner.

I also came across a great blog from Tina Bohlman, First Place winner of the Waxahachie plein aire Paint Out, who also is featured in my recent Facebook photo album. Here is the link to her blog, which covers the Waxahachie event: http://tinabohlman.blogspot.com/2009/06/first-place-award.html

So, what now? Well, tonight I will attend my first meeting of the Southwestern Watercolor Society, which I joined last week. This would not have happened had I not had the surprise pleasure of meeting their Correspondence Secretary during the Waxahachie Quick Draw event (literally, in the middle of the event, while I was painting!). After visiting with her, I was convinced that this was a society I needed to join. I cannot wait to draw from their rich reservoir of resources.

And . . . right now my studio is knee-deep in crap. This happens especially in the weeks leading up to a gallery show or festival (and I have just finished both), when I stop putting things neatly away, drag out mats, foam core backing, art supplies, etc.--and the junk just turns my studio into a storage shed that can no longer be navigated. I have successully cleaned out and organized my huge closet--now I only have to do the same with the studio proper--none of this of course is interesting.

I'm never sure if anyone reads these blogs, but I'm dying to talk to other artists. If you're a "creator" (of art visual, literary or musical), would like to recommend three books I have just finished reading, and they're changing my life. They are written by accomplished artists/lecturers, and really hit the nerve of the creative process. They are:

Art & Fear, by David Bayles & Ted Orland
Creative Authenticy, by Ian Roberts
The View from the Studio Door: How Artists Find their Way in an Uncertain World, by Ted Orland

Wrapping up the Plein-Aire experience

Well . . . after nearly a week of daily attempts at Waxahachie Plein-Aire painting, I finally created one I can proudly display. I started this one early Wednesday afternoon, drawing carefully for over an hour, and then laying in wash and attempting details. I quit at 7:00, disrupted by a shower, and later by overcast skies. I was not entirely happy with what I saw in the work. Returning today after school, and knowing I only had about 3 hours till deadline, I began laying in the painstaking details, and, I believe, saved the painting. Quite a few curious onlookers approached me throughout the afternoon, offering compliments once they saw the painting. The fellow artists back at the Ellis County Art Association also offered affirming words. As for myself, I'm pretty wiped out right now, but glad that I finally turned out a decent painting this week. The works will go on display tomorrow night at a barbecue for all the artists, and at least I'll have one in the show that doesn't embarrass me. I finally have some confidence that I'm going to "solve" this plein-aire experience. I have been totally blissful at the process, but not pleased with the final product. Until now.
Posted by David at 4:50 PM No comments:

David
I'm still a student. The truly educated never graduate. I want to explore it all. I want to live at least 500 more years. I wish I could read every book I covet, play every musical instrument available, and paint every scene that moves me.